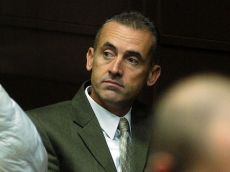 A state trooper in northwest Ohio who was once honored for making the most DUI arrests has been charged with drunken driving.

He was most recently an investigator at the Allen Correctional Institution.

Gibson was off duty when police in the town of Waynesfield say he drifted left of center and then refused to take a breath test.

He was named 2002 trooper of the year in Lima and Mothers Against Drunk Driving honored him in 1997 for making the most drunken-driving arrests by a Lima trooper.

A sad and ironic twist in this man's career.  If you're innocent why wouldn't you submit to a breath test?  Getting a DUI is far worse than careless driving charge.

Got comments? Let us hear them!